Video of A reading and more

A wanted to make a video of herself reading to send to MeMom and PopPop and Nana. I thought I would post it here too. She was super tired when she made it as she had already read 3 books before this. But she was insistent. LOL. So if you want to see her read a chapter from Inspector Hoppers Mystery Year click here.

On another note. Here are some of her drawings from the past few weeks. It is one of her favorite things to do. My little artist....

Sailing on a Pirate Ship....the spiky thing next to the pirate...well its the ships steering wheel of course because "you know those are round with lots of spikes coming off of it mom!" LOL 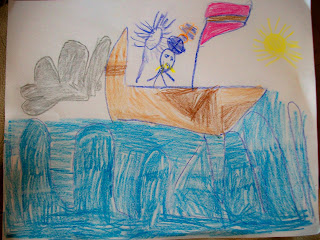 Baby Snow Leopard. She was not pleased with this as it didn't turn out like she envisioned it. But I thought it was pretty good. 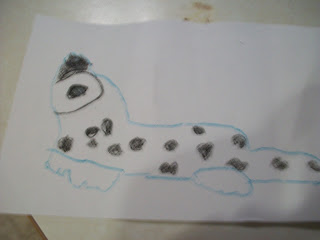 Our family...Umm you may be wondering who Will is...no we don't have another child I just have never mentioned on this blog LOL. He is the little brother A wants. She has named him Will and she talks about him all the time. He shows up in many of the pictures she draws. 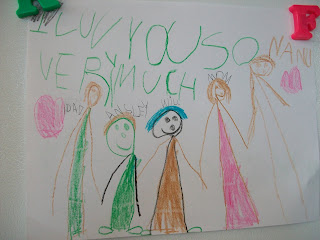 Baby tiger is a tiger on a key chain (hence the loop coming out of his head LOL). She was teaching him how to write is name the other day and the conversation was as follows "But I thought my name had an E at the end..BabE" And I hear A back in her normal voice say..."Well sometimes at the end of a word the Y says E." It was just to cute! I was laughing so hard from the other room as I listened to the conversation. 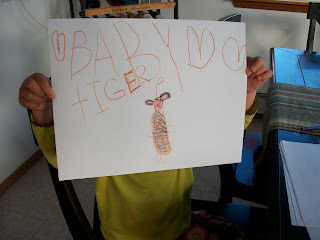 You know you live on the Bering Sea when you child draws a Halloween picture of a family of pumpkins who go fishing for salmon...silver salmon to be more specific LOL. 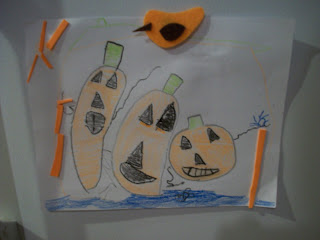 Alright off to search for a fake Christmas tree. We did not move ours with us an that was a mistake.. You can get live one here, but apparently not a decent one for under $100 and they are shipped in on a barge the week after Thanksgiving and aren't very fresh...the problem...no one wants to ship a artificial tree here. GAAH! So my search continues.
Labels: arts/crafts reading

Joyful Learner said…
Ansley is so cute! And I love her pictures, especially the family of Jack-o-lanterns fishing. Too funny!
October 28, 2010 at 2:50 AM