Today was a rough day. It just both seemed out of sinc with each other and butted heads a lot. By evening we both need a release. A headed into one of her little crannies to read and play her I-pad, and I headed into the kitchen to create.
Cooking and creating new recipes always puts me at ease.

Tonight I decided to pull out a salmon fillet, but I had no clue what I wanted to do with it. I had some lingonberries (low bush cranberries for those in Alaska) sitting in my fridge and I thought why not pair the two. This is what I came up with and it was DELICIOUS! 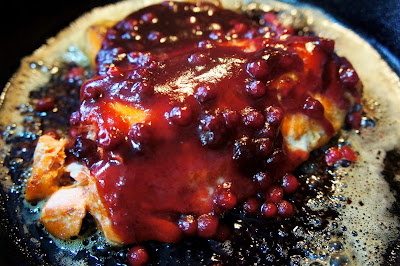 In a medium saucepan, combine cranberry sauce, lingonberries, maple syrup, brown sugar, and Dijon mustard. Heat over low heat for 20-30 minutes, stirring occasionally until thickened.
Meanwhile, melt 2 TBS butter over medium heat in a cast iron skillet.
Season salmon with salt and pepper and place skin side up in skillet. Sear for 3-4 minutes depending on thickness of fillet. Flip salmon skin side down and sear 2-3 more minutes. Transfer cast iron skillet to a 350 degree oven and cook until salmon flakes easily with a fork.
Remove from oven and spoon several large spoonfuls of sauce over salmon and de-glaze pan. 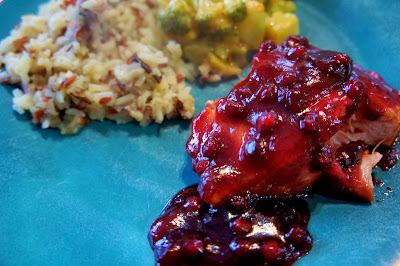 Of course feeling as I did, I couldn't just make dinner. I needed to bake.
I have been in the mood for pumpkin and cream cheese for the last few days and tonight I decided to create pumpkin whoopie pies. They were delicious. At the last minute I decided to add some pureed pumpkin actually into the cinnamon cream cheese filling I had made and it just knocked these over the edge from good to SPECTACULAR!
I'm going to go ahead and share my recipe with yall so I can have it written down somewhere. I made so many adaptations that I want to definitely remember it.

Whisk together flour,salt, baking soda, baking powder, cinnamon, nutmeg, and ginger.
In a separate bowl, Whisk together brown sugar and vegetable oil. Add in pumpkin whisking until mixed. Add in eggs and vanilla and stir until mixed. 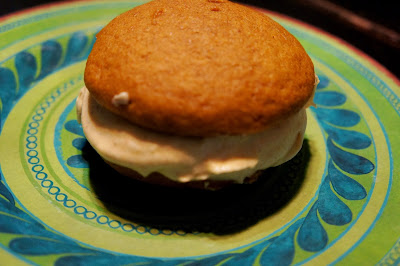 Unknown said…
My goodness! What a feast! I'm from the PNW and the men in my life are avid anglers. I can't wait to share your recipe with the rest of my family. Thank you!