I have been trying to upload pictures for 3 days now! But the Internet here has been slow that I have yet to get a single picture uploaded on her or in a facebook album. Sigh.

I have so many pictures from the last few weeks but it is just not happening right now.
So, let me catch up on the last week, since pictures aren't happening. Dh was out of town most of last week and the past weekend for training in Anchorage. It was very strange being here without him. I wasn't sure if he was going to be able to get back in Sunday as the weather was pretty bad. Blowing 60mph gusts, sleet, snow....but after being delayed in Anchorage for several hours he did board and was able to get in, although they bumped all but 2 bags off the plane. This happens quite a bit, it is rare that you get your luggage on the same plane as you come in on. Monday, no planes made it in due to wind, so no luggage. Dh finally got his luggage yesterday which was full of goodies form actual stores. (Remember there are no real stores here LOL) So clothes for A, makeup for me, and LEGOS! A was thrilled! He picked out a set of Prince of Persia legos for 7-12 and she spent all evening yesterday putting it together. She did the whole thing herself. Step by step, looking through the book and putting it together. She will tell you "Not all by myself." Since a few times I had to help press a stiff one all the way down, but it was all by herself. I was seriously impressed. And she has played with it for hours today.
This afternoon it actually was clear, overcast, but no rain and only about 15 mph winds, so we bundled up and spent over an hour hiking in the tundra. It was great, and really reminded me that I need to brave the weather more and get her outside. It's just the wind has been so strong lately that it literally knocks A down which scared her and she heads right back in. But it was great for both of us to get out of the house and back outside. 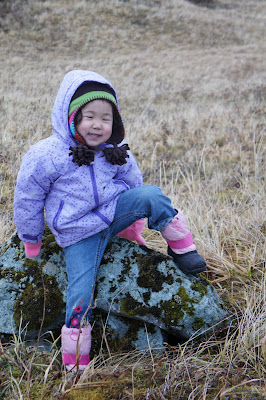 We are headed to the library tomorrow. A has been flying through books and has just finished a chapter book, The Three Blind Mice Mystery, that she immensely enjoyed and was actually able to tell me all sorts of details about afterwards so I know her comprehension is improving. It was reading level 3.5. I need to find some more books that are a similar reading level and similar length. We have a lot that are mid 3rd grade level, but they are long and A's eyes tire out way before that. This one she finished in 3 days reading about a chapter and a half a night. So any suggestions on 3rd grade level books that are only 80 or so pages, many I have found are 150 or more, which is just to much for her except when we take turns as we often do, but she felt great finishing this one all her own. She asked me if we can keep a list of all the ones she reads this year. So that is what we are doing. She feels great about it and is really proud of herself which I love for her :)
On another note, A has been getting more time with other kids which has definitely been an exercise in tolerance for her, but she has been doing great, although she has really started asking questions and she is realizing that she is different. So we are working on that. She said something today to the extent of "At home I can just be me, and its okay because I don't feel different at home."
Alright I have so much more to post if my pics would just post. but I guess that is for another day. Good night all!
Labels: Family play reading