Our week, storms, rainbows, and an awful migraine

What a week. Last week was a busy one, and a hard one on me, as I suffered from migraines for the most of the week. I had one good day on Wed where it stayed away, but Thursday it hit with a vengeance and sent me to bed. Nothing I took helped and I went through all my medicines to no avail. When I finally was able to sleep through the pain, I awoke on Friday and it was GONE! No headache since, knock on wood.
So needless to say I didn't take many pics this week, but I did get a few, especially from our beautiful Wed outside....but first things first....


Tuesday we had an awful storm, wind 75+, rain, sleet. It was just plain NASTY! Seriously, I did not want to get out, unfortunately I had a doctors appointment, so I had to brave it. The rest of the day though, A and I hung out inside. I snapped these pics of the letter she wrote me since I couldn't save it on the dry erase board. 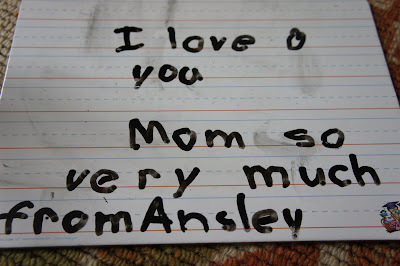 She has been writing for so long now, but she has just never had an interest in writing her words with lowercase letters until the last few weeks. Now she is doing great. When she makes up her mind, there is no stopping her. 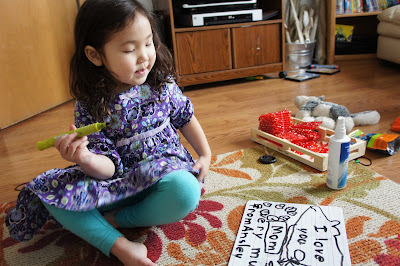 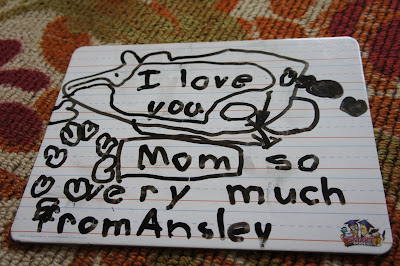 I always have a hard time getting pictures where she looks at the camera, so I tried the smile shutter on the camera and was able to get a few. A has issues with making eye contact while talking, playing, anything actually, and when I asked her about this, since it had become an issue, she told me "it feels not comfy inside. I feel anxious and uncomfortable." So I have stopped pressing it, but have explained why eye contact is so important to many people, and we are working on ways that she can show she is listening. Anyway, I got a few good pics of her in the beautiful dress that my cousin got her for Christmas. 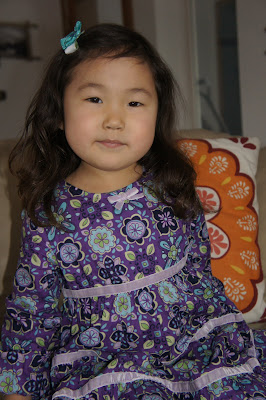 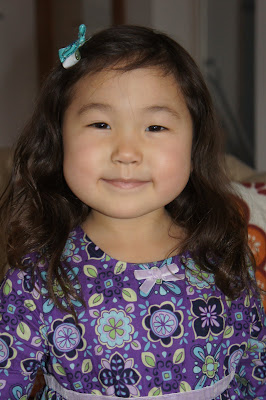 On Wed, we were had just finished math and we looked out the window and saw this amazing cloud formation. It had turned out to be a glorious day, especially after the stormy Tuesday, so we spent the whole rest of the day outside, exploring the tundra, WWII remains, and playing at the park. 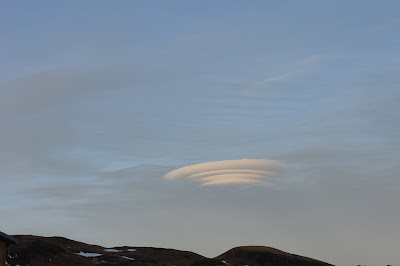 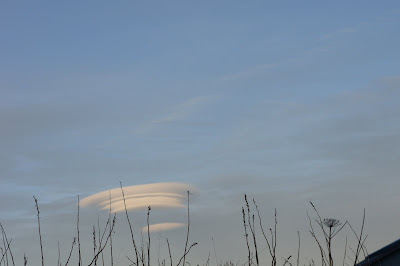 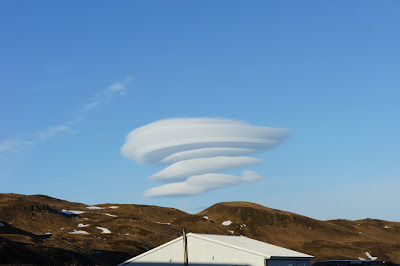 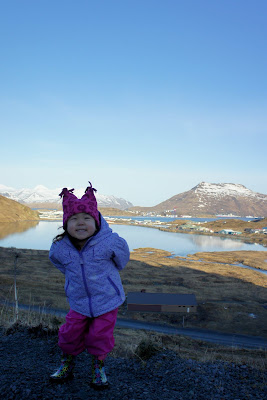 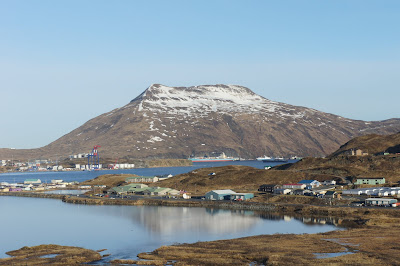 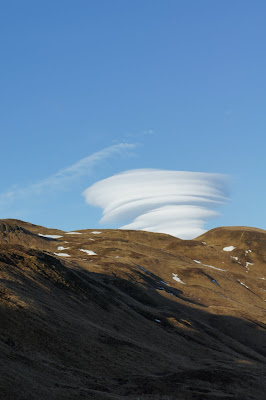 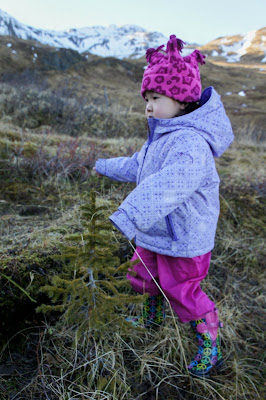 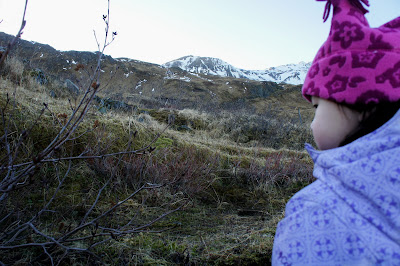 She found a feather from a Bald Eagle, that she was quite excited about. 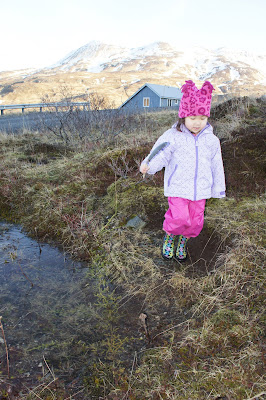 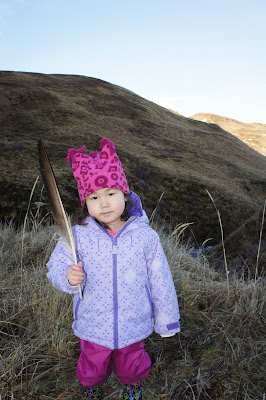 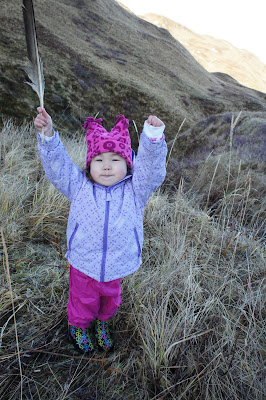 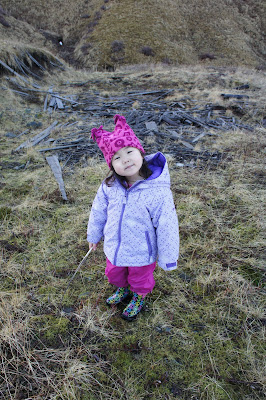 A trench from WWII....filled with water from the storm the night before. I love walking the tundra with her. She loves to talk about history and the war here....and it has sparked her interest into why there are wars, why there has been 2 world wars, etc. 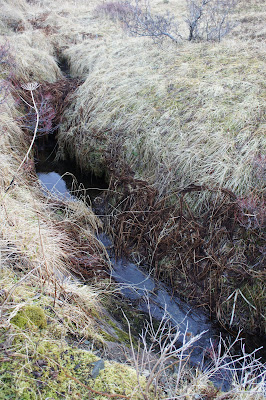 Remnants of a building from WWII 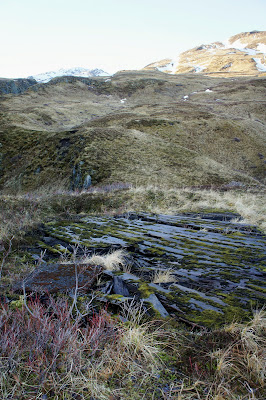 WOW! That's a long way down. 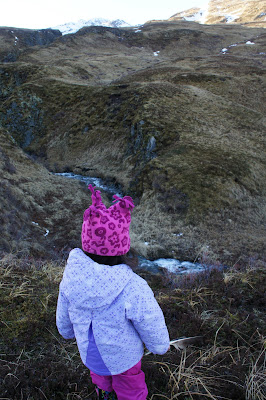 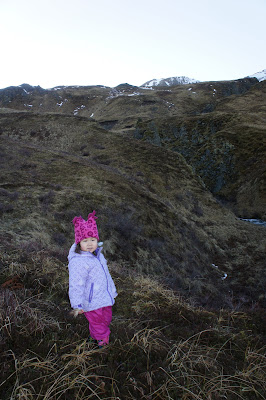 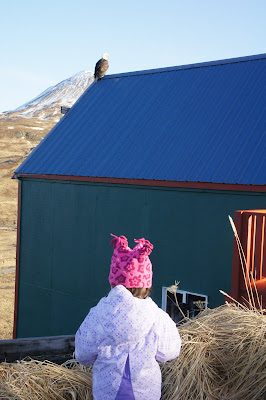 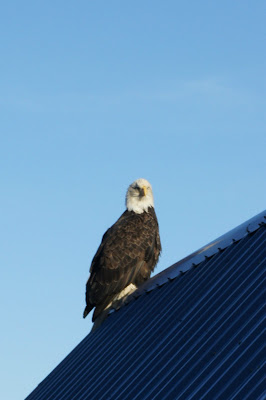 A wanted to drive out to Summers Bay and walk by the water and collect shells. I snapped some pics on the way out. 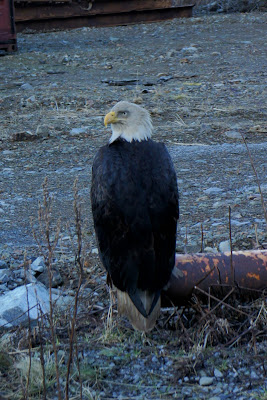 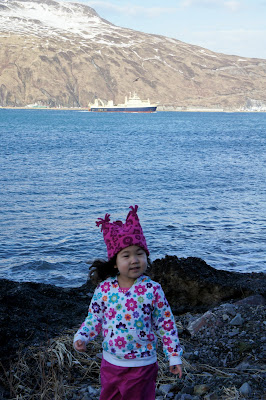 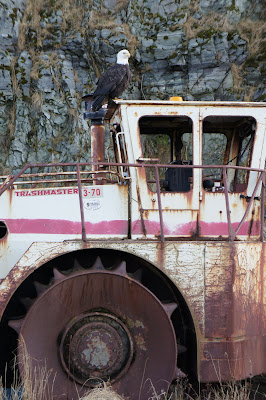 So, since we couldn't get to Summers Bay, we headed to the park! 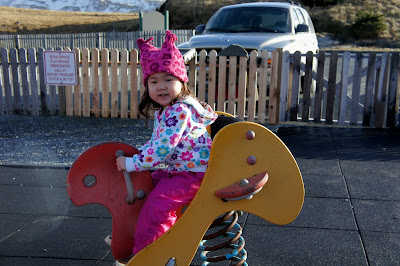 As we came around a curve on our way home from the park, this beautiful sight came into view. I had to pull over and snap some pics. This is why I ALWAYS carry my camera with me! 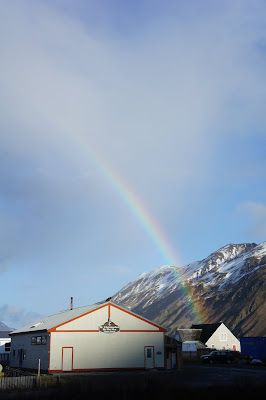 Then I wondered if I could make it up the hill and snap a pic with it behind the church before it dissipated as I knew the rain has ended and it would soon be gone. I barely got 3 pics before it disappeared.... but this was a great shot! 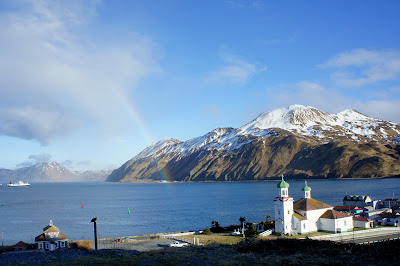 Thursday A had a doctors appointment for her acid reflux, and was weighed and measured....at 3 years 10 months, she is 32lbs and 37.5 inches tall. But the most interesting part of her appointment, we found out that she has a bifid uvula. You know the little hangy thing at the back of your throat that hangs down in a U shape, well....A's is shaped like a W. Apparently it only occurs in 2 percent of the population. It is very interesting looking LOL.
Anyway, on Saturday A pulled out her movable alphabet that she hasn't had out since we moved and she started writing a story. She only needed help spelling two words... cousin and carrot. She used the dot from the J as a comma and asked me to cut out some commas for her to use next time. I was impressed with the spelling of the words...especially 'radishes' and the fact that she new she needed to add es, and not just s. She is spelling at a mid 2nd grade level, and LOVES to spell. Honestly she spells her answers to everything now...in the air with her finger. She loves for us to call out words for her to spell, and she told us this weekend that she wants to be in a spelling bee. "A real spelling bee, not one here at home." Scripps her we come in a few years??? LOL 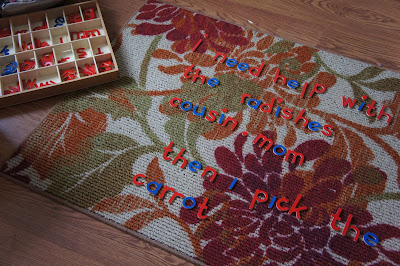 On another note, DH FINALLY cut his hair..... he has let it grow since we moved here, and A told him he looked like a werewolf. Unfortunately, instead of cutting cutting it, he went and buzzed it himself. Sigh. Oh well, pics to follow shortly. Night all!

Joyful Learner said…
In Asian culture, it can be considered rude to make direct eye contact, especially with elders or opposite sex. K and I both have a hard time making eye contact at times, usually when meeting new people. Photos are hard too as neither of us feel completely comfortable with it.
January 26, 2011 at 8:42 PM