My mom arrived safely last Sunday, and we have been having a great time. She was exhausted of course from 2 days of travel, so she crashed once she got to our house. Sunday was our anniversary (7 years!) and so she watched A for us Monday night so that Dh and I could go out to the restaurant at the hotel. It was great night and a rare treat for DH and I, and she and A had a ton of fun, making memories, and having a picnic of pizza and marshmallows in A's room :)

While we were out it started snowing, and we have had snow every day so far! My mom brought the snow I guess (and the cold weather... our temps for the rest of her visit are forecasted to be in the 20's)!

With all this snow, we have been out playing in the tundra everyday. We went out again Thursday afternoon and I actually remembered to bring my camera. Good thing to, because I caught Nana, A, and Bella having a snow ball fight! 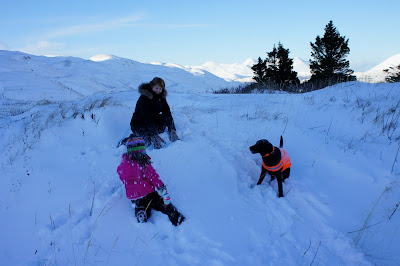 It is just amazingly breathtaking here when the mountains are snow covered. (And Bella loves it as you can see LOL!) 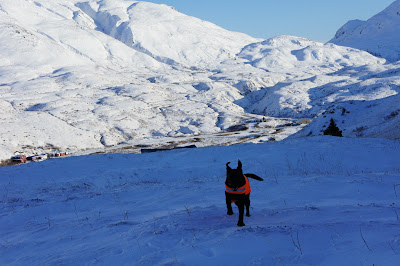 The snow is perfect for snow angels and sledding but way to powdery for snowmen. 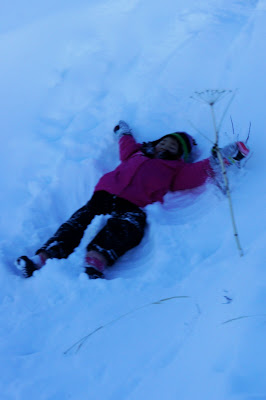 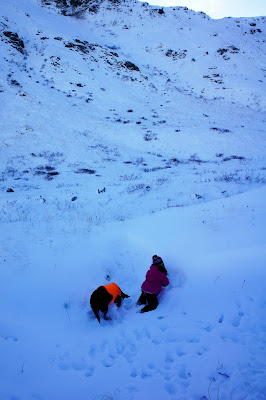 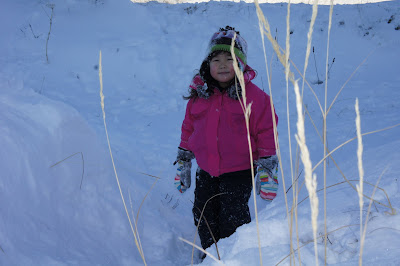 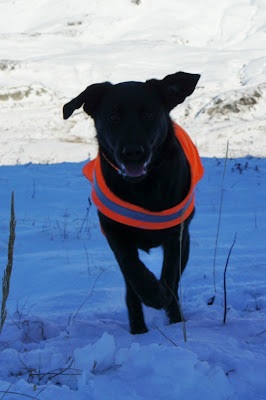 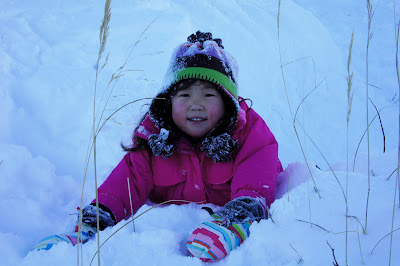 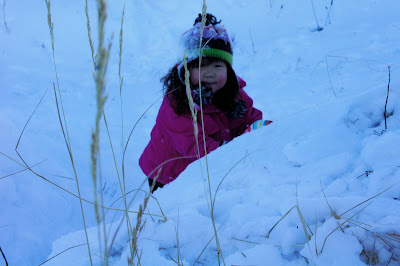 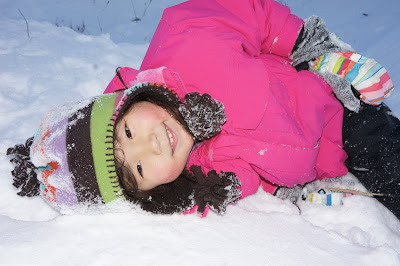 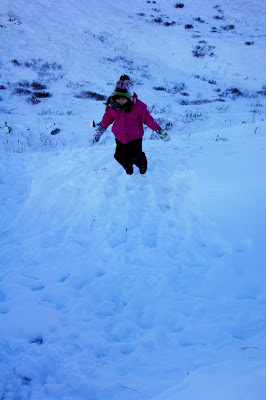 Yes, she slid into the bomb crater upside down...multiple times I should add. Crazy child! 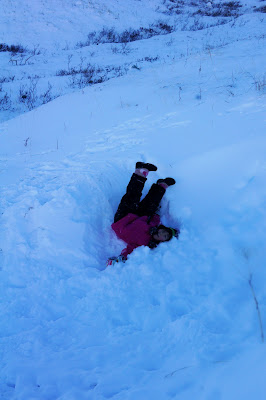 DH got Bella an orange vest and it really helps me to keep an eye on her out here. We have also are working on training her to come to a whistle and she is doing awesome with it. She only got in some trouble today because she and her other doggy friend decided to take a walk about, and she started to come, but when he didn't she decided that it would be more fun to follow him. Neither of them liked being dragged home by the collar when Steve and I caught up to them though. LOL 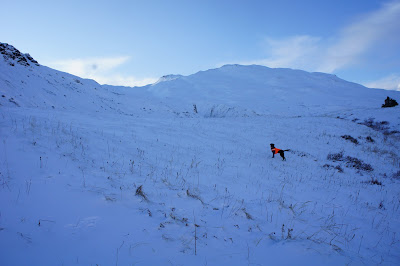 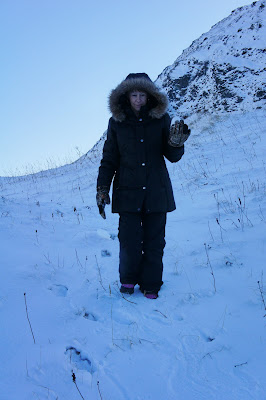 We got several more inches Thursday night and of course we just had to get out Friday and sled. 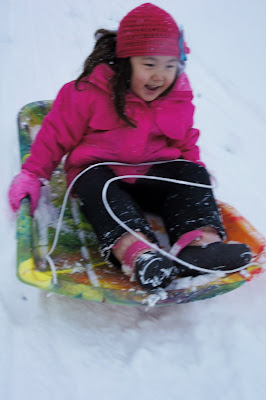 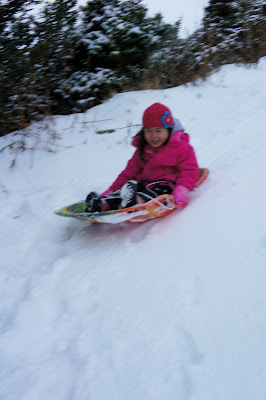 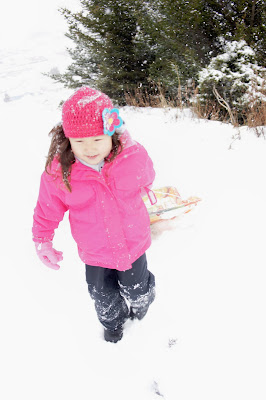 Here's Bella with her best dog friend. She LOVES Tuck! 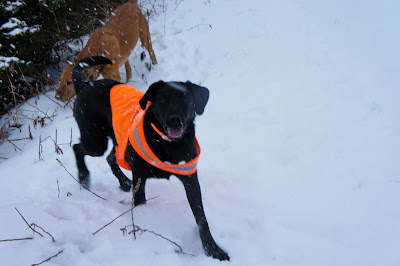 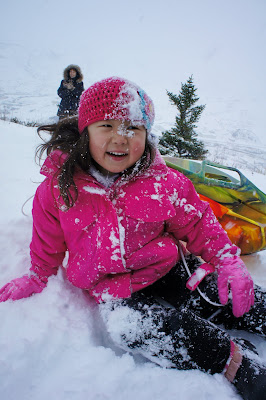 My mom was so excited! She said this was the most snow she had ever seen at one time in her whole life...pretty sad considering there was only about 6 inches on the ground at the time...but that's what happens when you put us southern girls in Alaska LOL! 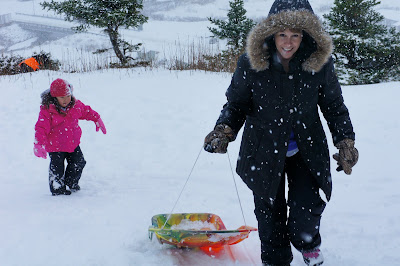 Nana and A went sledding, and Mom went by herself quite a few times too. I really don't think I have ever seen mom having so much fun! It was awesome, 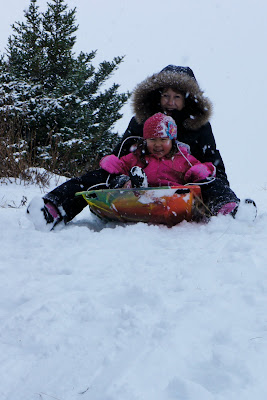 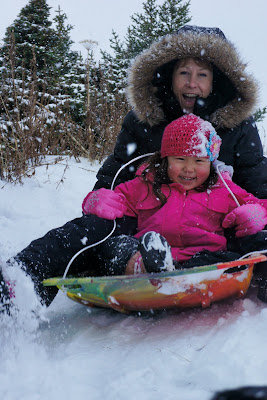 That last pic there is one of my favorites of all time of the 2 of them. I am blowing that one up and framing it. Look at the sheer joy on their faces. Such a great memory.

It continued snowing off and on throughout the day and after dinner A and DH left to make a run to Alaska Ship Supply to pick up a few things. About 10 minute after they left, the weather turned on a dime. It went from clear and calm, to blizzard conditions. The windows were bellowing in and out and you couldn't see out them. I hoped they were okay. Soon after I got a phone call saying that Dh's car wouldn't start and they were stuck at the store. He didn't think I could make it to them in the weather but I said I would come....this is were my adventure begins LOL....

Mom and I got all bundled up. Luckily I put on my snow pants, boots, a sweatshirt, and my snow jacket, as well as a hat and gloves. After braving our way up the steps and to the car, I turned it on and managed to break the windshield wiper on the driver side. (Yay me!) It was stuck in the ice/snow and literally came apart into two pieces. I was left holding the wiper and arm, and all that was left attached to the car was a short metal arm piece. (Can you tell I know nothing about cars LOL!) After trying unsuccessfully in the dark and blowing snow to reattach the arm thing, I decided to just make a go for it, tossed the wiper in the car and backed out. I got about 5 feet down the road before we were in complete whiteout conditions and I could see nothing! It took me 20 mins to get down my hill. Having to stop several times to wait for a break in the wind to see where the curves ahead were so I didn't drive off into the ravine. I finally made it down the hill to the stop sign (which is under a street light) and I got out to try to once again to fix the wiper so that I could at least have that going for me, although I wasn't sure if it would help much at that point. Trying pointlessly to reattach the wiper, a car slowed as it passed me, but continued on. Little to my knowledge my mom took the moment to gesture with her arms and say "really! Your not going to help.?!" Apparently she was illuminated by the streetlamp and the truck backed up and stopped. The guy was able to quickly snap the wiper arm back on and after I hugged him with my mom yelling "Kiss the man" LOL, we were on our way. We slowly made our way down the road and had gone about a quarter of a mile when DH called and said he had gotten the car started and we could turn around! I decided to pull over and wait for him to reach us, and then we could follow each other up our road that was covered in drifts of several feet in some places. FUN! Well at least we all made it fun safely, and my mom has a new adventure to tell when she gets back to the real world!

I am off to bed. I am so looking forward to a wonderful Christmas Eve with my family. Merry Christmas!
Labels: Family play unalaska